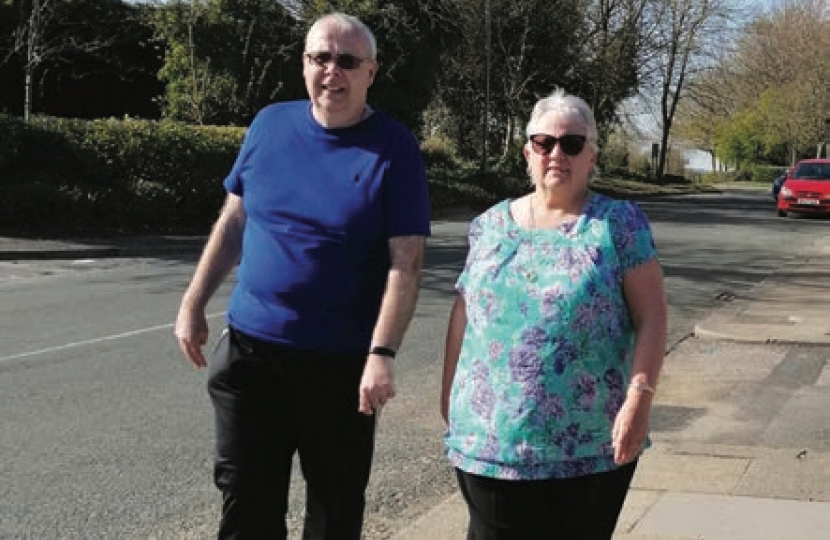 Shildon resident, Gillian Clarkson, has been awarded Unsung Hero of the month by the Bishop Auckland MP for her work at St Helen’s Auckland Tesco pharmacy throughout the pandemic. Nominated for her tireless work at the Tesco pharmacy, as well as participating in a virtual charity walk from Shildon to Alvor in Portugal, Gillian was praised by local residents in their nominations. One said:

“Gillian has worked tirelessly throughout the Coronavirus pandemic to ensure customers get their medication, whilst at the same time looking after her 83-year-old mother. In some cases, she would even deliver to their homes.  Not only that, she is, along with her husband, doing a virtual walk from Shildon to Alvor in Portugal in aid of charities. She definitely deserves this award.”

Dehenna Davison MP, who has been running the Unsung Hero scheme since last April in response to the Coronavirus pandemic and community reaction, said:

“Not only is she going above and beyond in her job, but Gillian and her husband Alan are dedicating their spare time to raising money for a number of charities in memory of five friends they have sadly lost.

“I am absolutely delighted to award Gillian this month’s Unsung Hero award. So many people in their nominations mentioned her resilience throughout the toughest days of the pandemic, professionalism and kindness. Well done Gillian!”

Gillian Clarkson has a record of charity work, having previously held fundraisers for Pancreatic Cancer and The Lullaby Trust raising in excess of £2500 for each of them. Along with her husband Alan, Gillian is currently raising money for Macmilllan Cancer Trust, Versus Arthritis and Butterwick Hospice Care with 98% of their target already met.

The Unsung Hero awards scheme, in place since last April, is set to continue as we move out of lockdown to recognise local heroes across the community.

“We decided to do the walk in memory of 5 really good friends who we have lost throughout this pandemic and we felt we wanted to do something in their memory so we approached each family and asked where they would like the money donated to and we are sharing it with Versus Arthritis, Butterwick Hospice and MacmilIan Cancer. To date we have raised £3350 with lots to come in and we have a charity night in October to finish off our fundraising.

Previously I have done fundraisers for Pancreatic Cancer and The Lullaby Trust raising in excess of £2500 for each of them. I would just like to say how honoured I am to receive this award but I would like to share it with my husband Alan who has done the walk with me and helped me with my fundraising. It was a lovely surprise as today is the day that we pass the 1000 mile mark.”